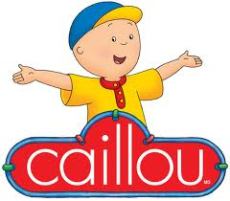 In addition to coffee, Netflix, and Bruno Mars, I notice a tendency to refer to Caillou in my facetweets (tweets that transfer to my status updates).  Obviously,Caillou is an easy target for parent bloggers who have been forced into watching the Canadian cartoon.  Once when I was in a certain green room for a certain talk show one of the production assistants turned on the T.V….and obviously Caillou was on.

“Ugh, not this show” I said as the wardrobe guy and his assistant came in.

“Huh, never heard of it” they both said.

People in fashion without children do not know who Caillou is and if they saw their wardrobe they would balk.

I fear one day I would accidentally have someone having something to do with Caillou bump into me on Twitter.  I would then profusely kiss their ass and they would calmly put their hand on my shoulder and say, “It pays the bills, eh?” and then skate away in their hockey gear while waving the Canadian flag.

Anyways, here are the collection of directly or indirectly Caillou mentions:

“The snow soaked through my knit boots making my socks wet and squishy…it’s about as comforting as Caillou’s voice.”

“Hey Maria- Remember that time last week we stayed up after midnight watching ‘Caillou’ because you had the stomach flu and after you finally dozed I was left awake watching shows like “Three’s Company” and “Quantum Leap”?….and then again last night with the late night ‘Caillou’ because we were up nursing an achy left ear who gave birth to your tube?…Then the Tylenol with Codeine kicked in and the ear felt better, but Tony came up crying with some random discomfort. So after he dozed off you were happy as hell playing with  toys and tapping your little finger on your chin saying, “Hmm..Let’s See” (which made me laugh despite it all)…….yeah….good times….”

“Oh Caillou….. Quit your whining! That goes for you too Rosie!”

“‎24 hours ago I was awoken by an announcement of somebody’s bloody nose, 5 hours later by a preschooler requesting new pants, 12 hours ago I helped rescue my son’s goldfish (who was stuck in the faux aquarium coral) with a slurpee spoon…after a less dramatic day that included pumpkin pie, laundry, ‘Annie’ and ‘Cailliou” on a loop, and some down time with the fam, a couple chick flicks were a great way to end the night.”

“Cuddling with coffee, crackers, and Caillou.”

”Have to take the kids to the store today….’toilet paper, light bulbs, socks for Rosey, craayyonns’..(only diehard Caillou watchers got that one).”