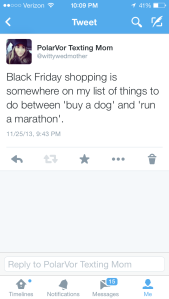 This tweet was written like any other, heavily laden in sarcasm…meant to be witty. Little did I know that just 3 months later I would be sitting on my couch with three of my very own dogs. Dogs….sitting on me or near me, licking themselves obnoxiously, shedding hair like crazy…dogs. I suppose I should tie up my shoelaces because I’ll probably have to run the marathon or go Black Friday shopping this year. So how did I go from this tweet to 3 dogs? Let’s just start by talking about getting Lucky.

Daft Punk’s “Get Lucky” would be a bit of a theme song for me early 2014. I’d be ‘up all night to get Lucky’…food…water….back into the house. Lucky…the Beagle. Shortly after Christmas, my husband and I sat on the couch and had this conversation.

“Maybe next year we’ll get a dog. Who knows…maybe for Joey’s 10th birthday.”

I can’t remember who said it…but we were in agreement about this. Little did I know that we would get a dog next year, and then adopt two more, taking them home on Joey’s 10th birthday.

I looked at the box of dog treats getting stale on my dresser. I bought those for my job. In my job, I travel to daycare homes to monitor their food program. Inevitably, I’ve found that almost every house would have 1-3 dogs, maybe a couple cats, and then…of course…kids. “These ladies are nuts!”, I’d think. Why would you want all this chaos? It’s not that I never had pets nor enjoyed them, but with my four kids the idea of caretaking for anything else, picking up poop, having a needy critter…I poo poo’ed it. These days I’ve had to find some sort of meditative mantra as I pick up the poop in my backyard.

So….anyways…once the idea was planted to get a dog (whether it was God or my barking deceased uncle’s idea)…it was a seed planted that had to grow. Daily, we’d look at the shelter’s webpages. I was looking for a Shih Tzu (like my mom’s)…or at least some sort of Poo Foo Shih Moodle type of dog. My husband kept noticing this dog.

“Biscuit” just wasn’t rubbing off on me. He wasn’t a Poo Foo Shih Moodle…he was a Beagle. I didn’t know too much about Beagles, but then I gathered they like to run (away), dig, howl, hunt. Joe kept associating warm fuzzy feelings about Beagles from his sister’s old Beagle ‘Corky’ who passed on, but was a good dog.

The County had a Shih Tzu. My husband was home from work on lunch hour. He agreed to go look at the dog with me. Of course, the Shih Tzu was gone.

We decided to look anyways and there he was…’Biscuit’. ‘Biscuit’ looked nothing like the picture. He was serious. The thing that attracted me to him was that he wasn’t barking. I liked that. We had a meet and greet with him and he was very excited. He jumped on us and I remember him smelling Dorito dust on Tony. All but 1 out of 4 kids would meet ‘Biscuit’, and we soon decided we’d go for it. Since he was an older dog (their best guess was 5), we even got the ‘Golden Whiskers’ rate for him $55. We joke about our $55 dog, the best $55 we spent. ‘Biscuit’ would have to get neutered, so we would bring him home the following day.

When I walked into the Pet Smart, I felt like an expectant mother walking into ‘Babies R’ Us’. Everything felt so new and foreign. I didn’t know what the hell I was doing. Obviously, like a new mother I bought all the wrong things and forget a few necessities. It was like “Ooh…look at these newborn cowboy boots!” and then forgetting to buy onesies.

At Target I anxiously told the checkout lady, “We’re getting a family dog…we’ve never had one.”

Target lady, “I have 4 kids and am scared to get a dog…we’re too busy.”

After 14 years of marriage we adopted ‘Biscuit’ renamed ‘Lucky (Luciano)’ on 1/14/14. I noticed the number pattern and found a few insights on the internet…take it or leave it…but considering where I had come from it is meaningful to me.

When Joe brought Lucky home it was like a newborn coming home.

Joe carried Lucky in, all doped up from his neuter procedure. We had his bed ready…his food/water bowls We walked him outside, where Lucky would quietly look around…at all the Polar Vortex winter wonderland…and back at us…he was home.

One thought on “A Blog With a Dog: Getting Lucky”